LH Architecture Design in this case is a company focusing on architectural design and space design. The office in this project is designed by the company's own team. The designer breaks the convention, abandons the redundant decoration, adopts the minimalist style, and uses the most primitive black and white color and geometric graphics to create a simple, bright, pure and direct office space full of design aesthetic feeling. Therefore, the designer made a black-and-white office facade, and used the large area of transparent French windows to link the inside and outside space closely, establishing the minimalist style of the entire office space. As the location of this project was originally occupied by a shop transformed from a factory building with almost no decoration, the interior design solution retained the original columns and ceiling without any treatment, thus keeping the primitiveness of the building. For the design of the front desk, the designer chose the white of the car baking paint, which is matched with the imported Italian cement paint and echoed with the original cement colored ceiling. The background wall of the front desk is paved with thin rock flakes imported from Italy. The chandelier is the white strip lamp, combined with the black line, enhancing the spatial three-dimensional feeling omnidirectionally. The combination of the original parts and the modern paint surface makes the space more hierarchical and echoes the black-and-white tone, creating a time concept of primitiveness and modern. Office space must have both functionality and aesthetics and achieve the perfect unity of the two. Therefore, the design will separate the functional areas orderly and organically to extend the space utilization. The whole floor is made of medical grade white plastic cement board, which can be laid in a whole roll like a carpet. It is easy to take care of, so as to achieve the effect of simple but not easy. In terms of color, it takes minimalist black and white as the main tone, with some other high-purity colors, without exaggerated visual impact, but it can break through the convention, giving people a clean sensory enjoyment. 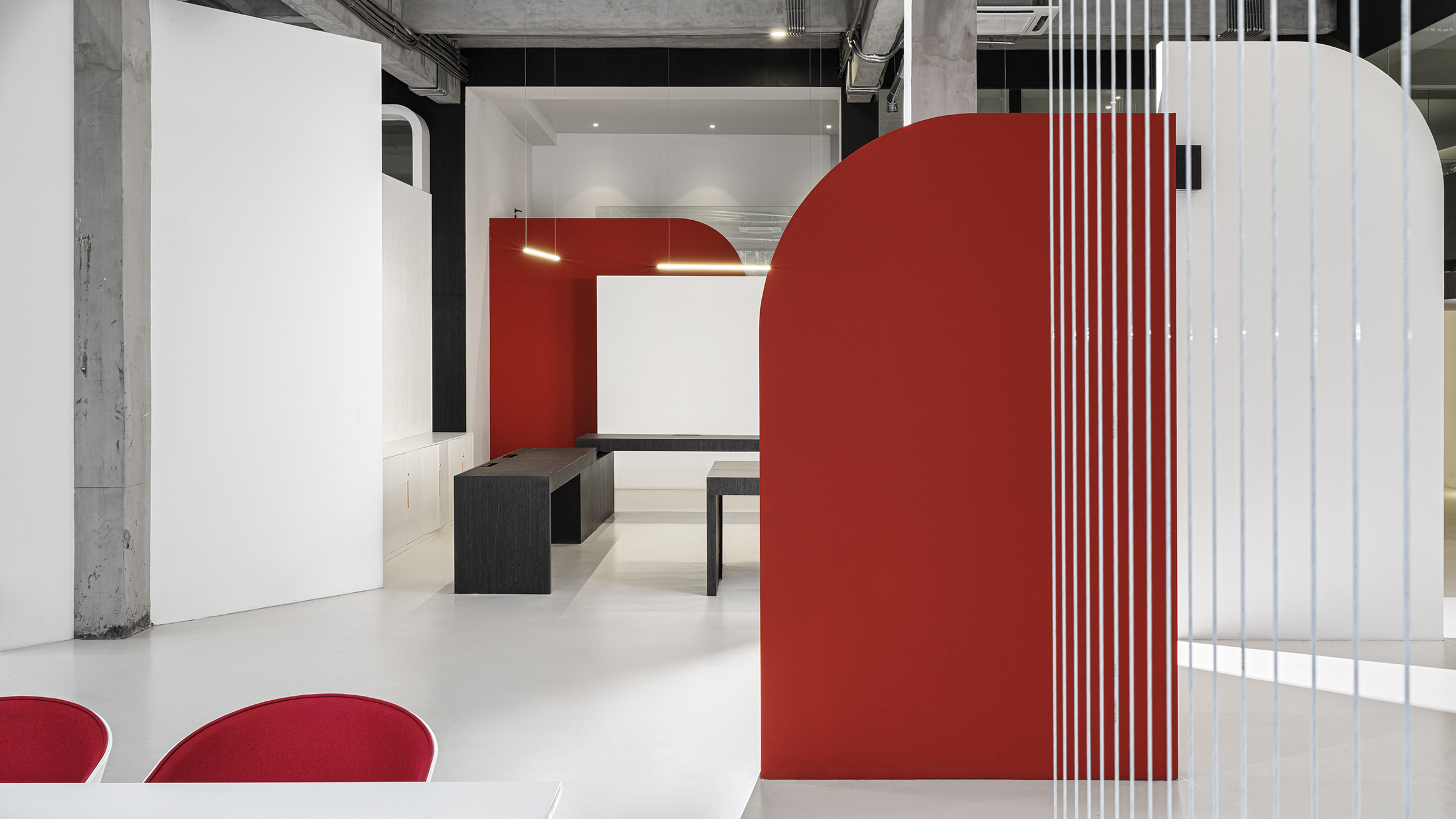 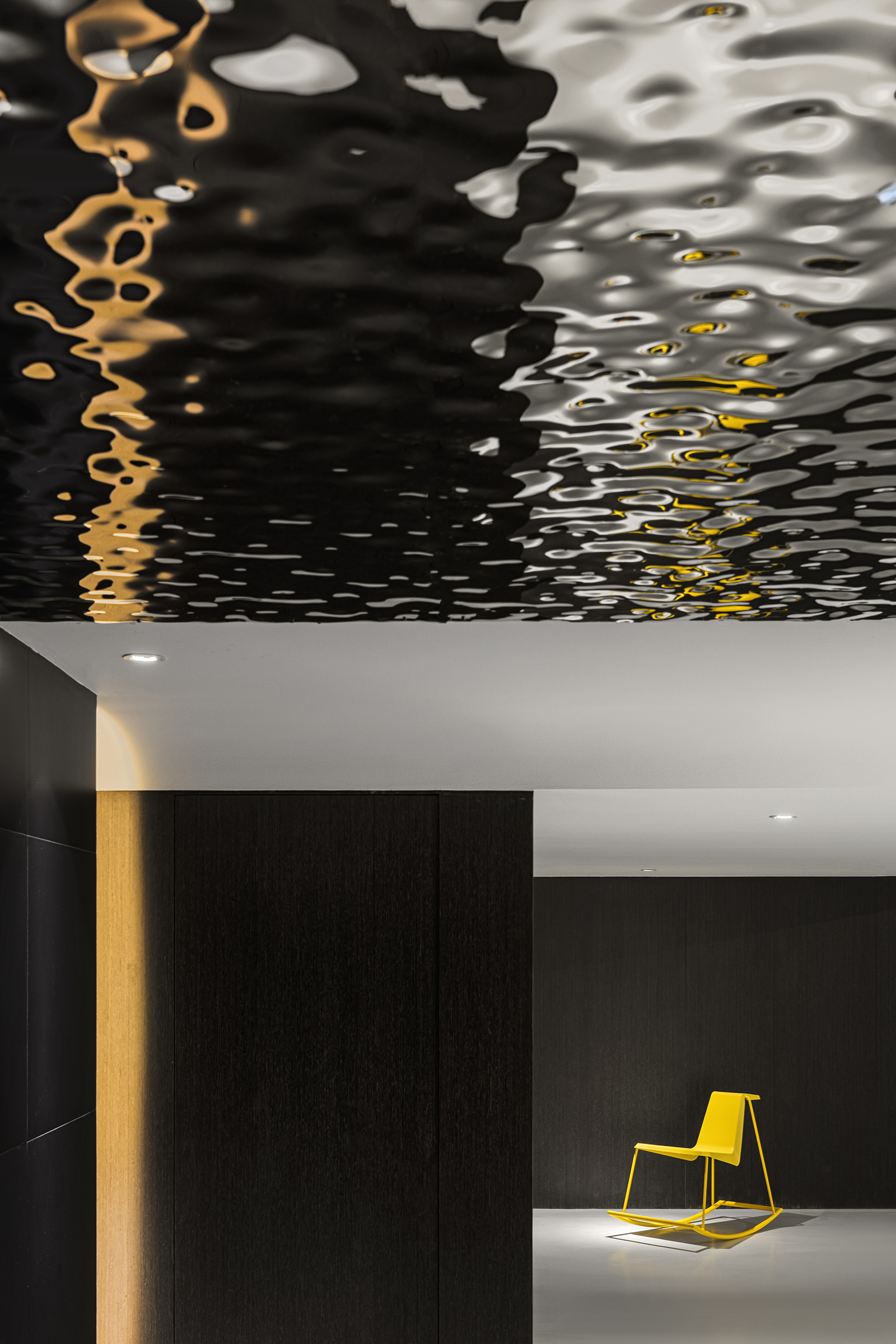 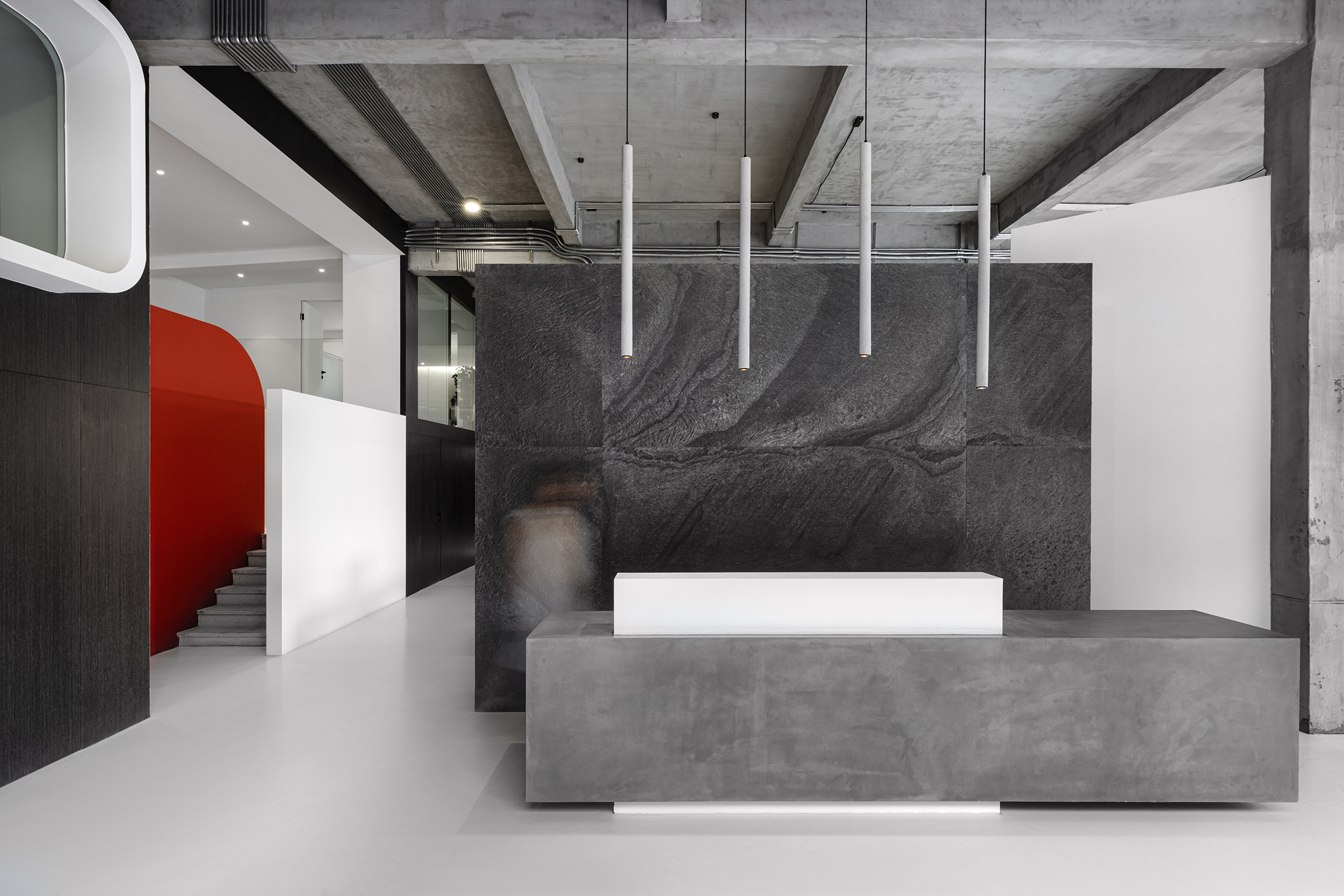 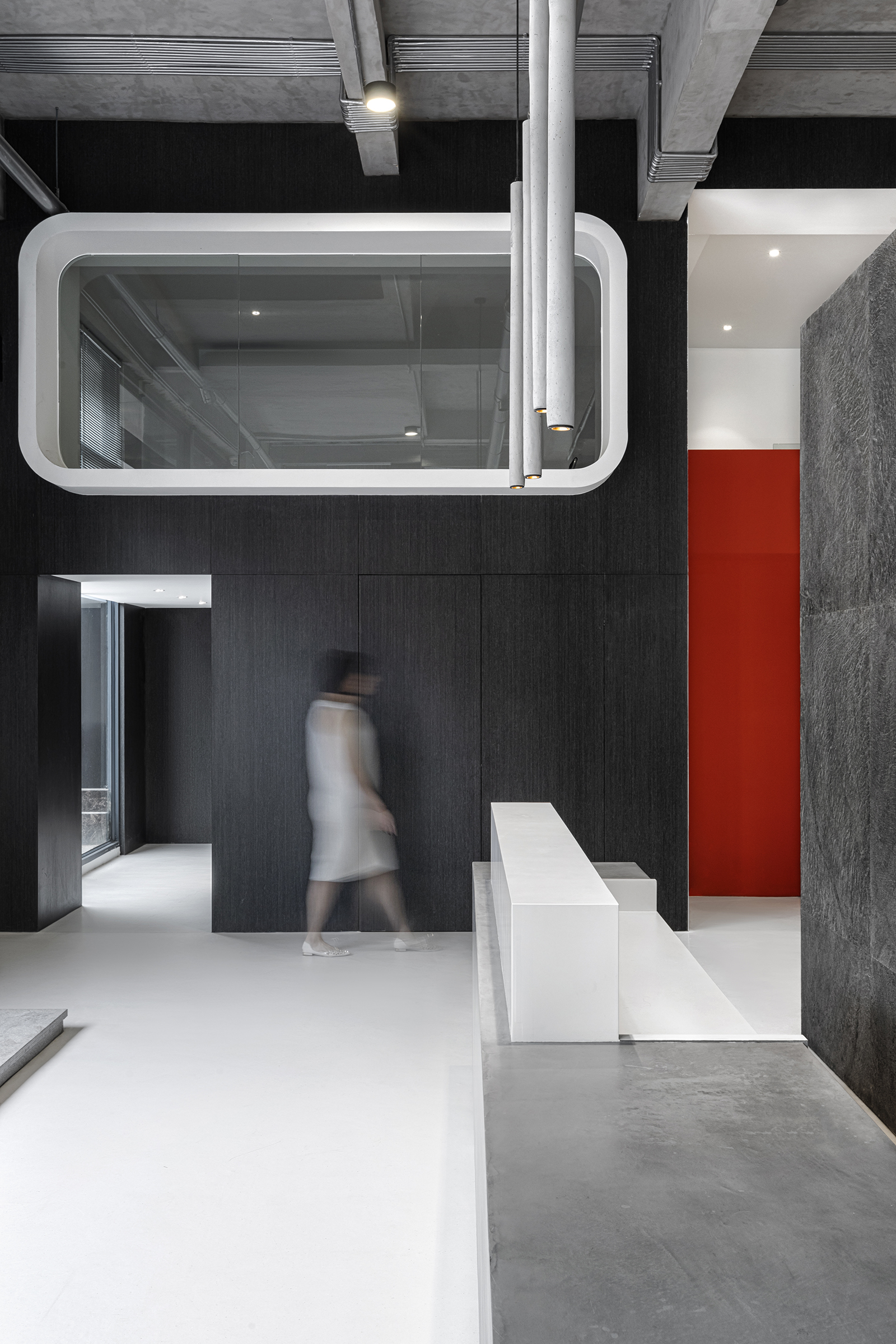 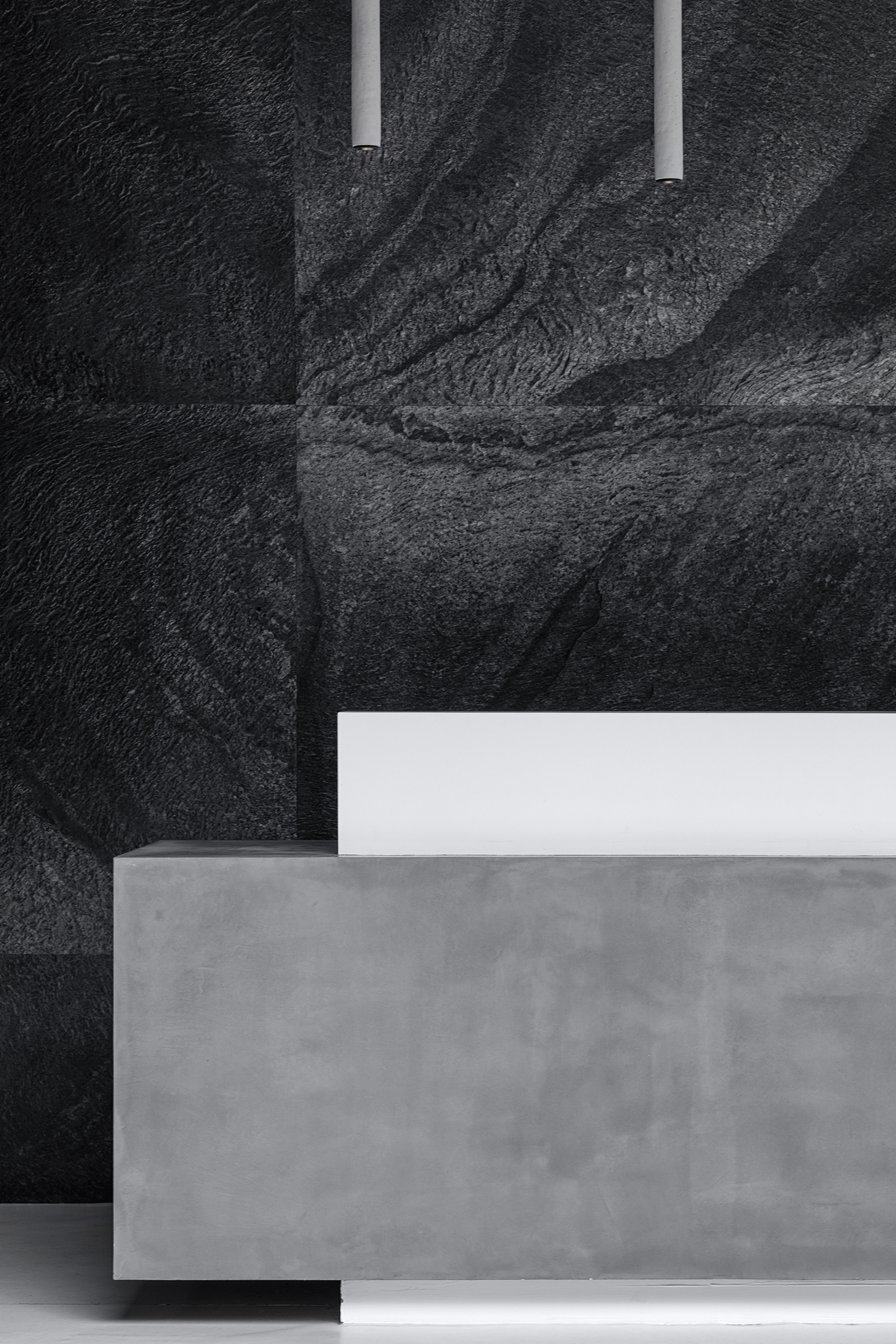 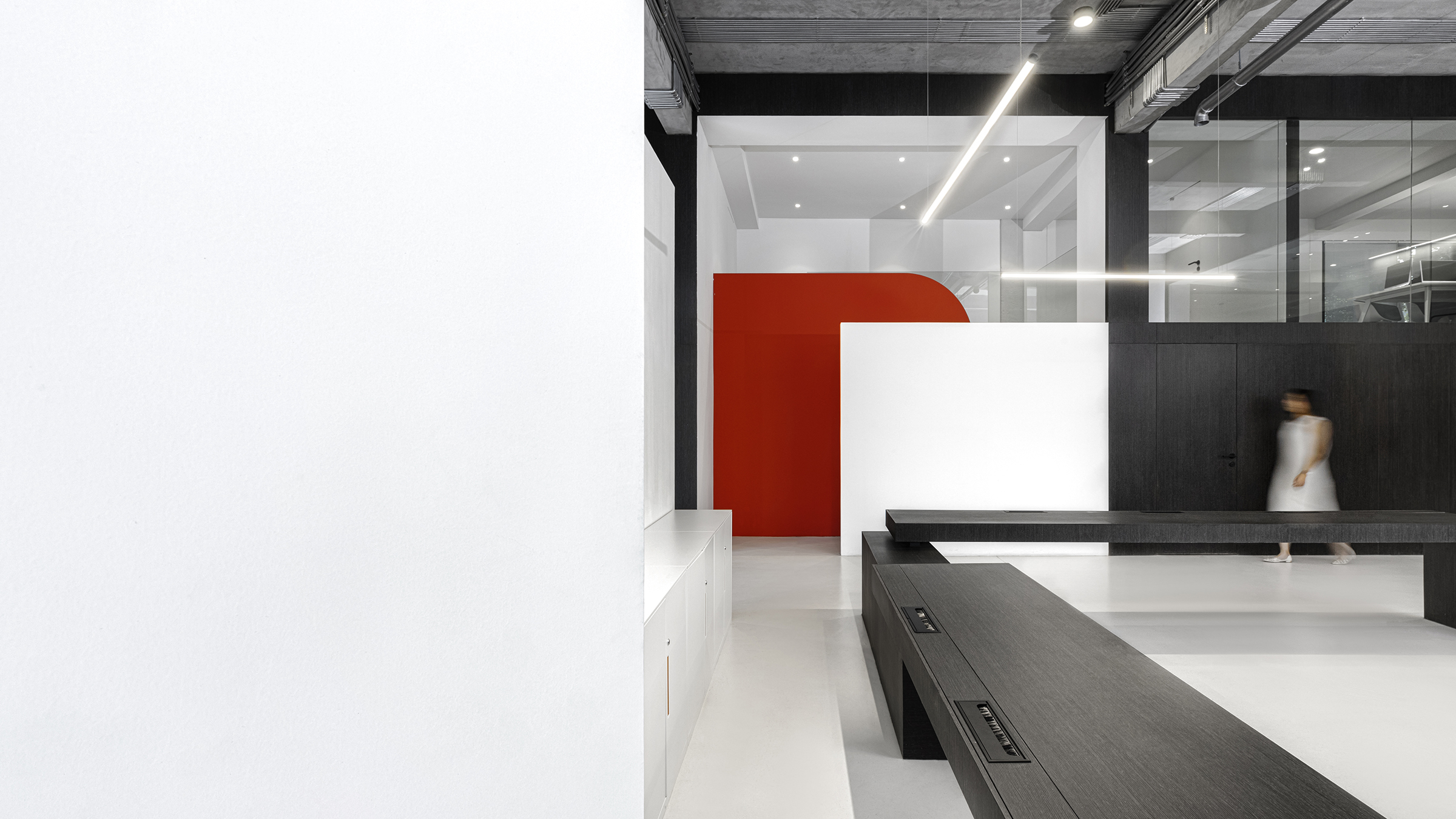 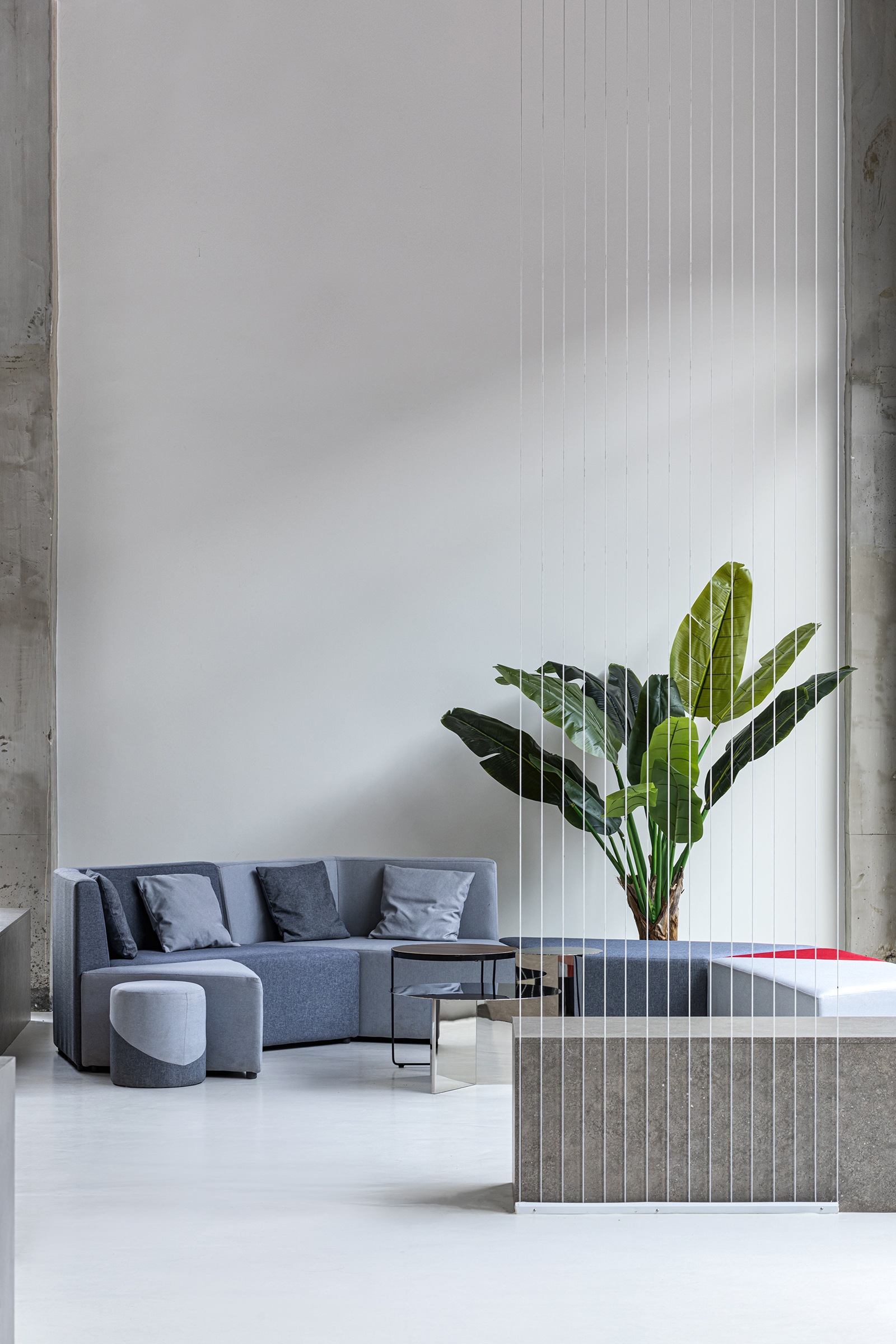 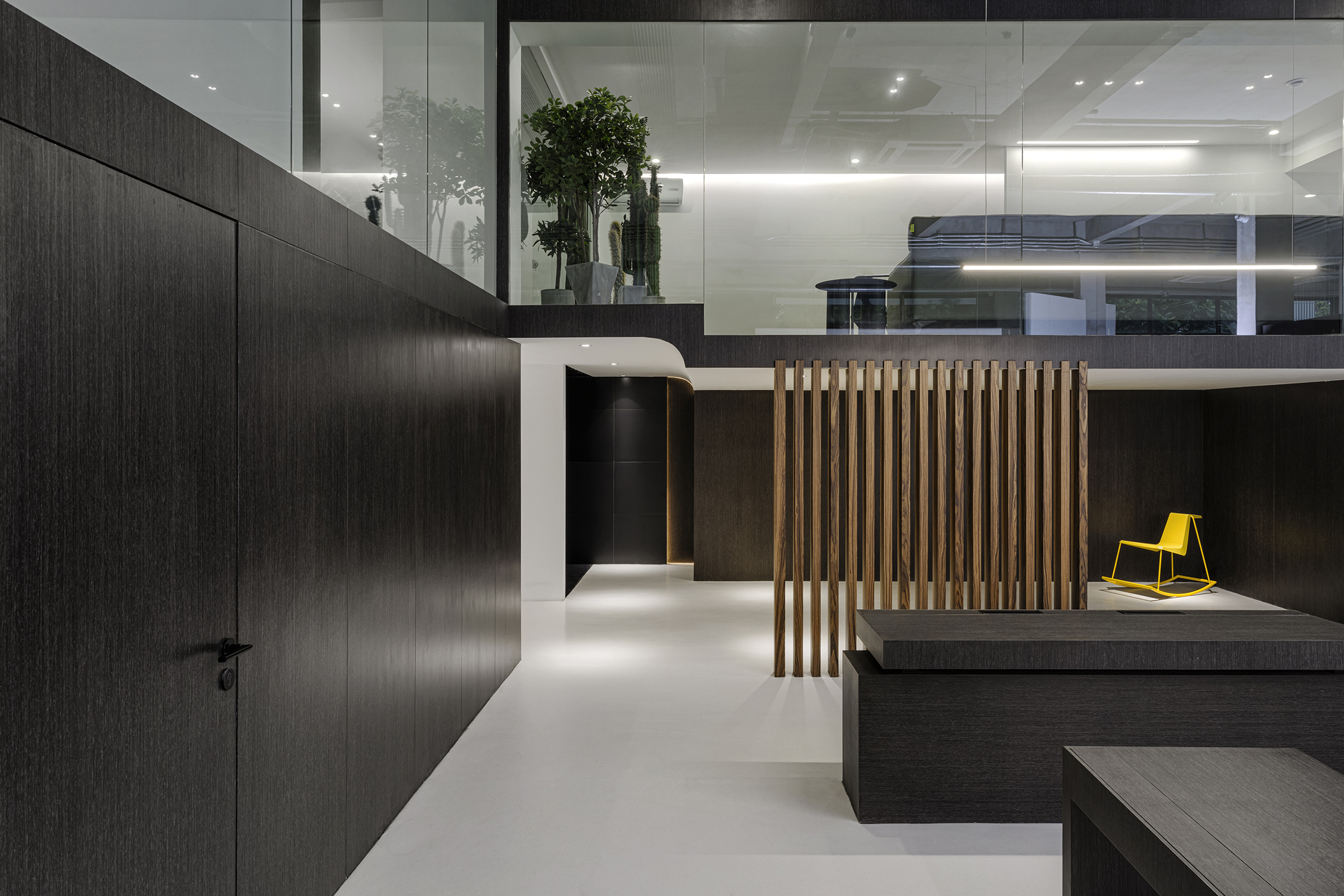 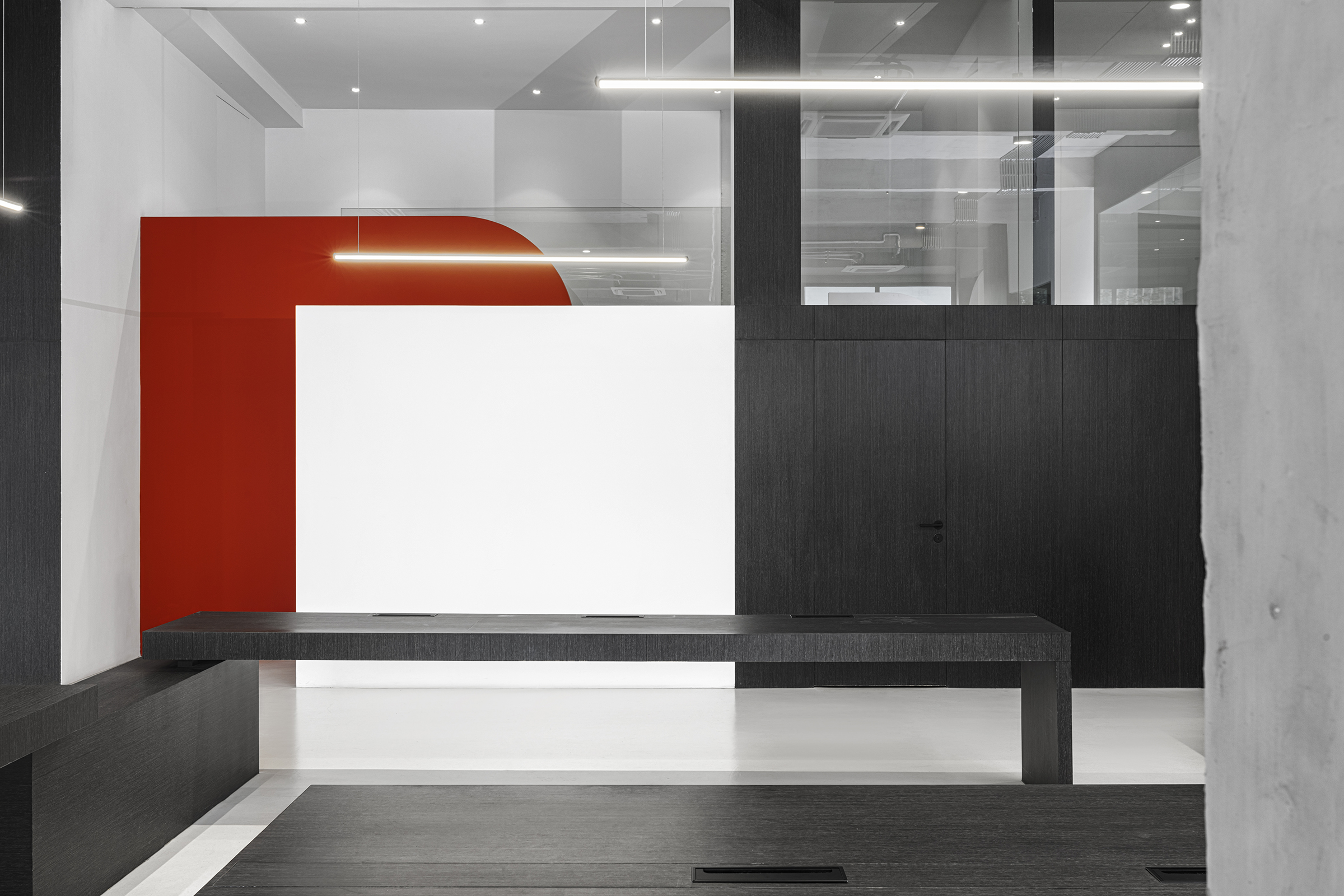 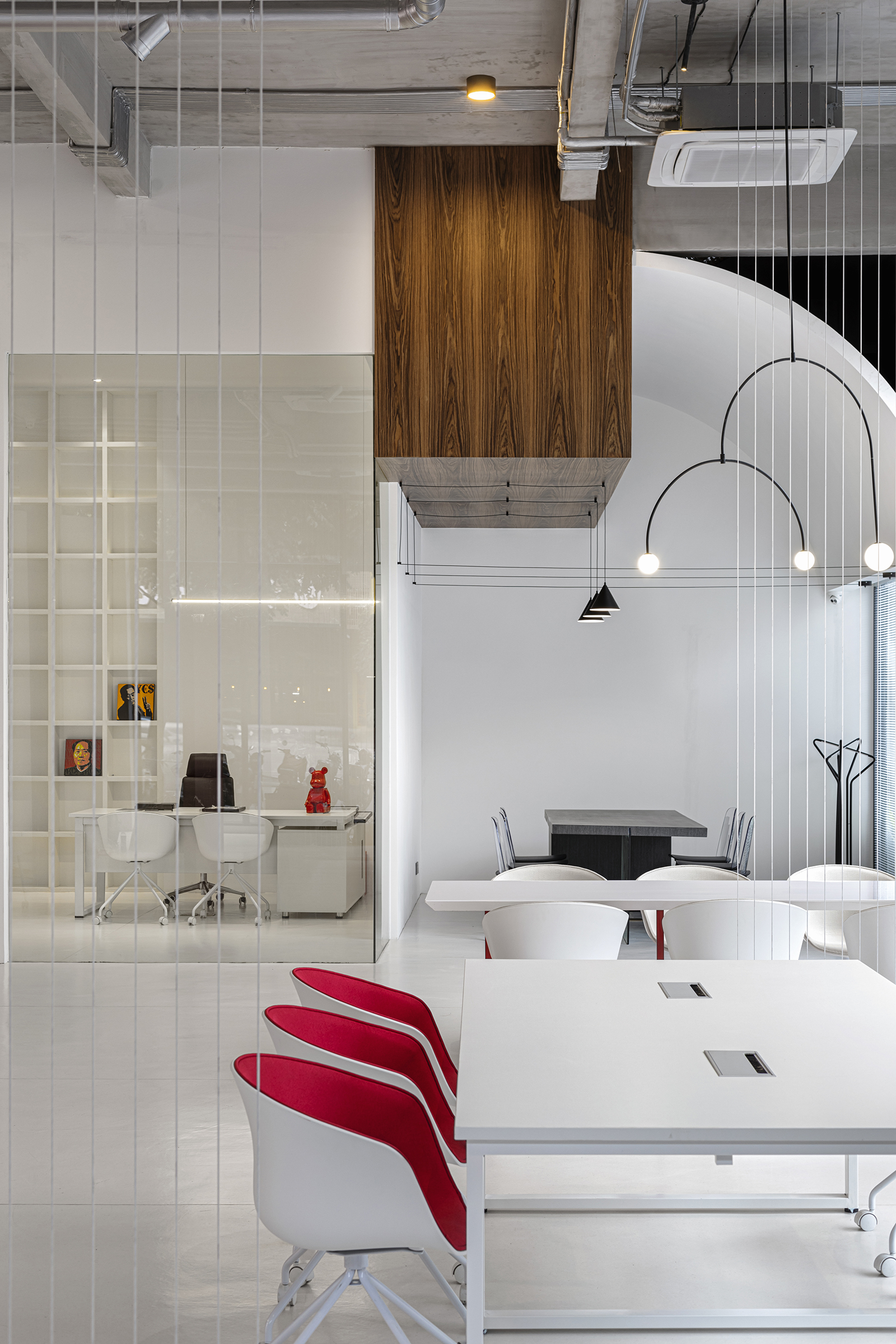 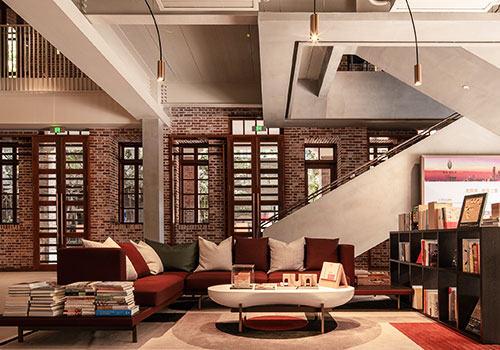 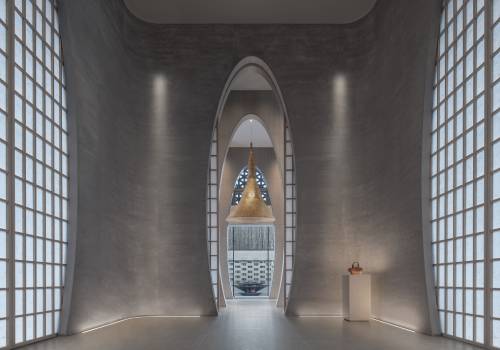 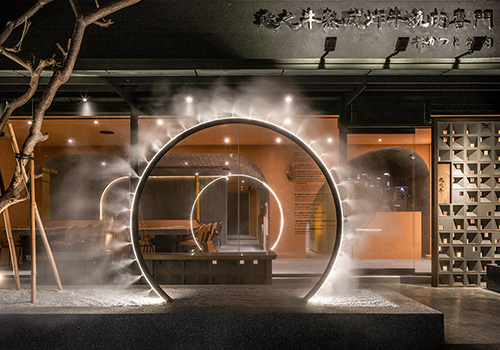 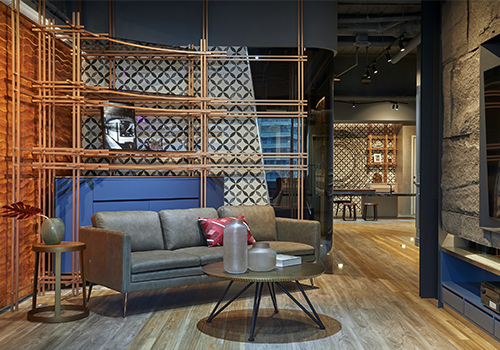