Space is formed due to people, the yearnings and needs towards the living environment reflect the presentation of own personality. This design project is based on simplicity as the core of the design principle, the origin of simplicity was derived from the rising of capitalism, where majority of the people were sunken in the big river of the era, indulged in material and desire until the rising of minimalism by modernist, such that more and more people long for minimalism starting from the 21st century; the so-called minimalism is not forfeiting details and compressing sense of beauty, it is filtering unnecessary complexity and returning to the nature of design, featuring respect to humanism even though lacking glorious resplendence. The designer grasped onto the core content of simplicity and demonstrated it in this work. The living room and dining room combined as one public space which used black, white and grey as the main base tone for the color, highlighting the dignified and conservative beauty of the space; wooden color tone is then applied for matching, further integrating the warmth introduced by wooden color while having a conservative spatial characteristic, amongst these, it may be discovered that dark wood color tone is adopted for both the living room and the dining room tables, where the ingenuity increased the sense of layers for the space. A square table is selected as the dining table, eliminating unnecessary use of space while further emphasizing on the face-to-face interactive talks between the family members. There is a Japanese room at the back of the dining room, and the Japanese style is implemented for this space, demonstrating different looks of diversified cultures. The addition of iron pieces to materials may be discovered in several places, the combination of different materials including wooden texture with iron piece creates a vivid and strong visual effect for space, once again corresponding to the modern design principle. In response to the rainy climate of Yilan, diatomaceous earth material is selected to regulate the humidity and moisture of the space. 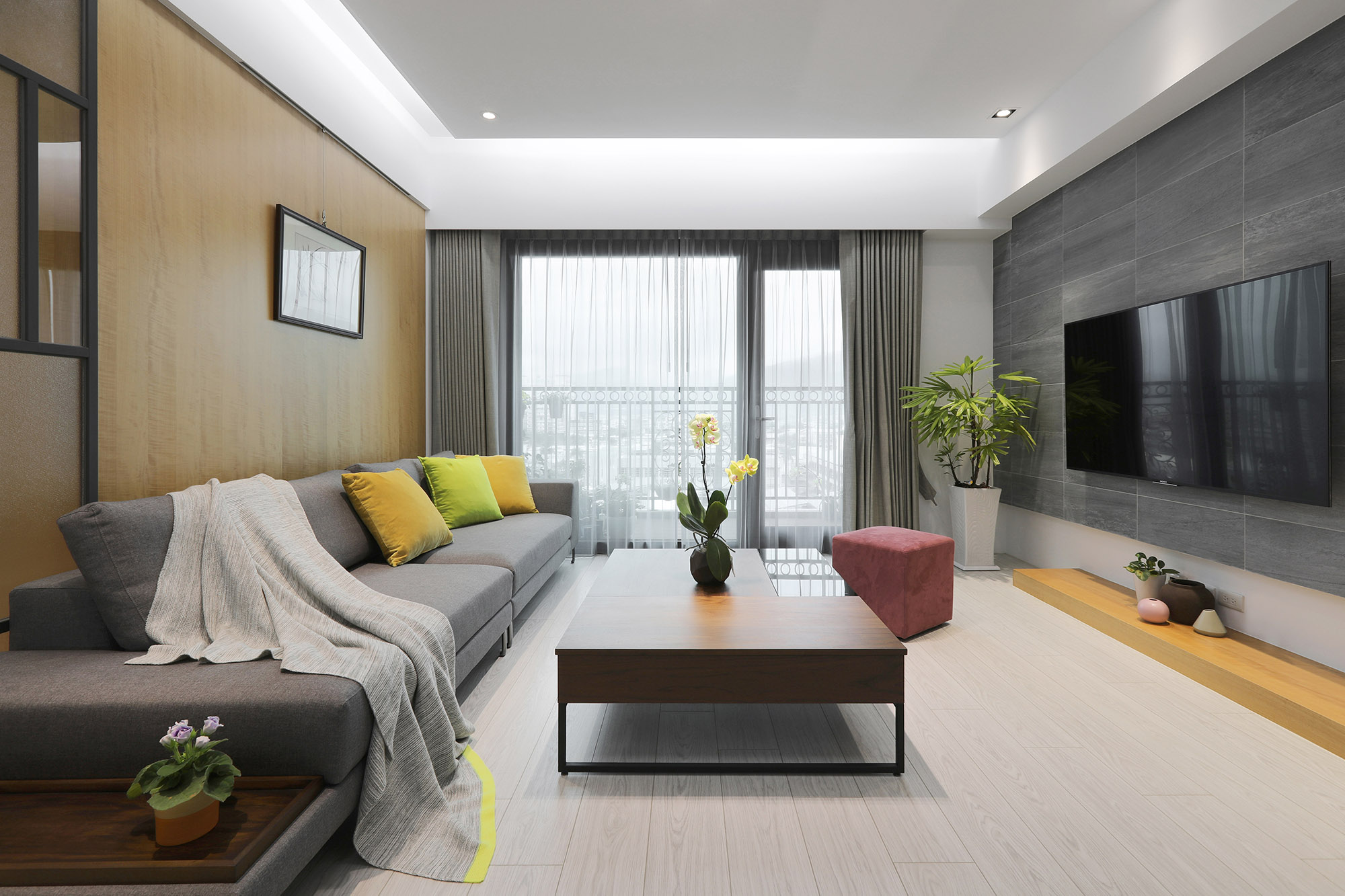 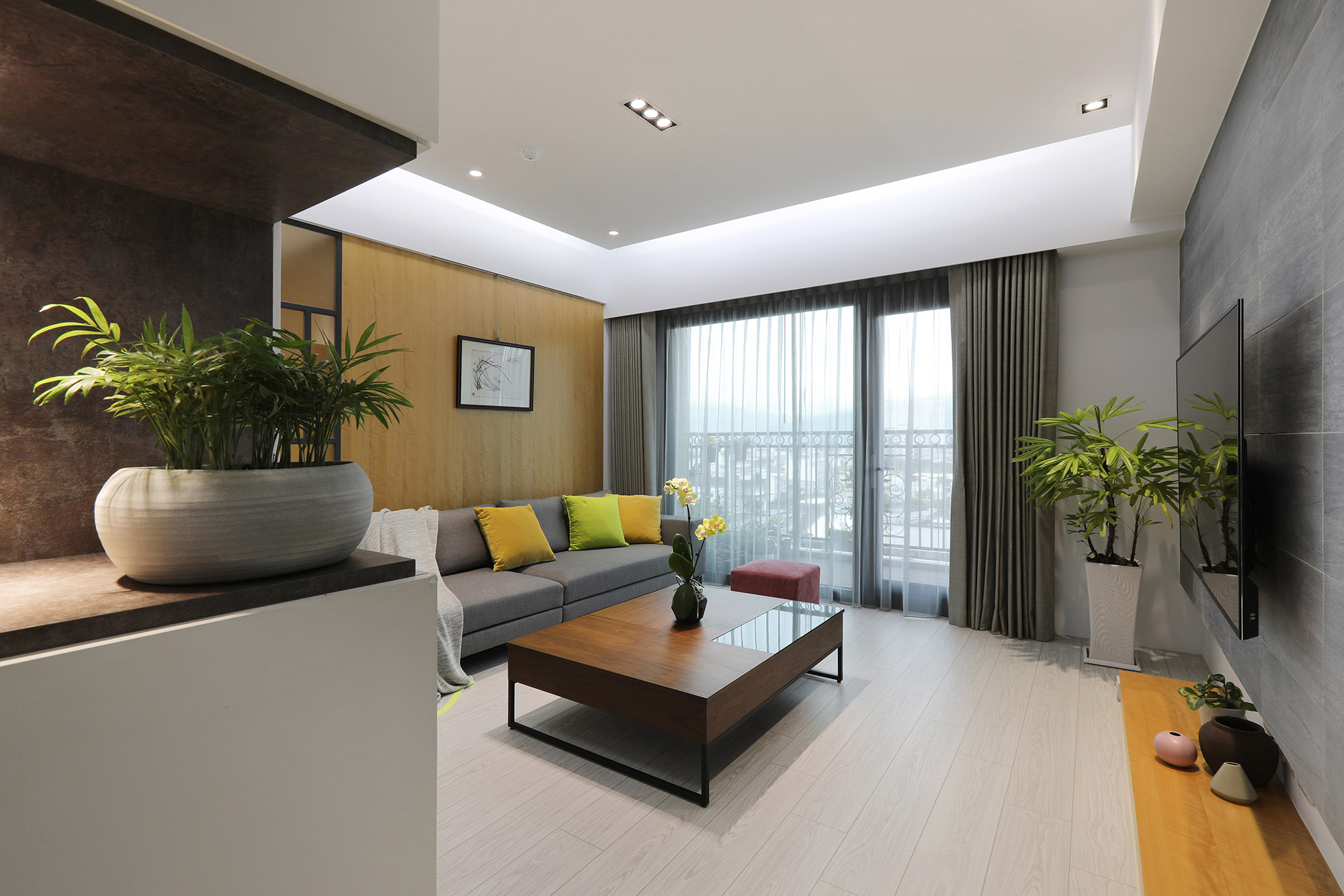 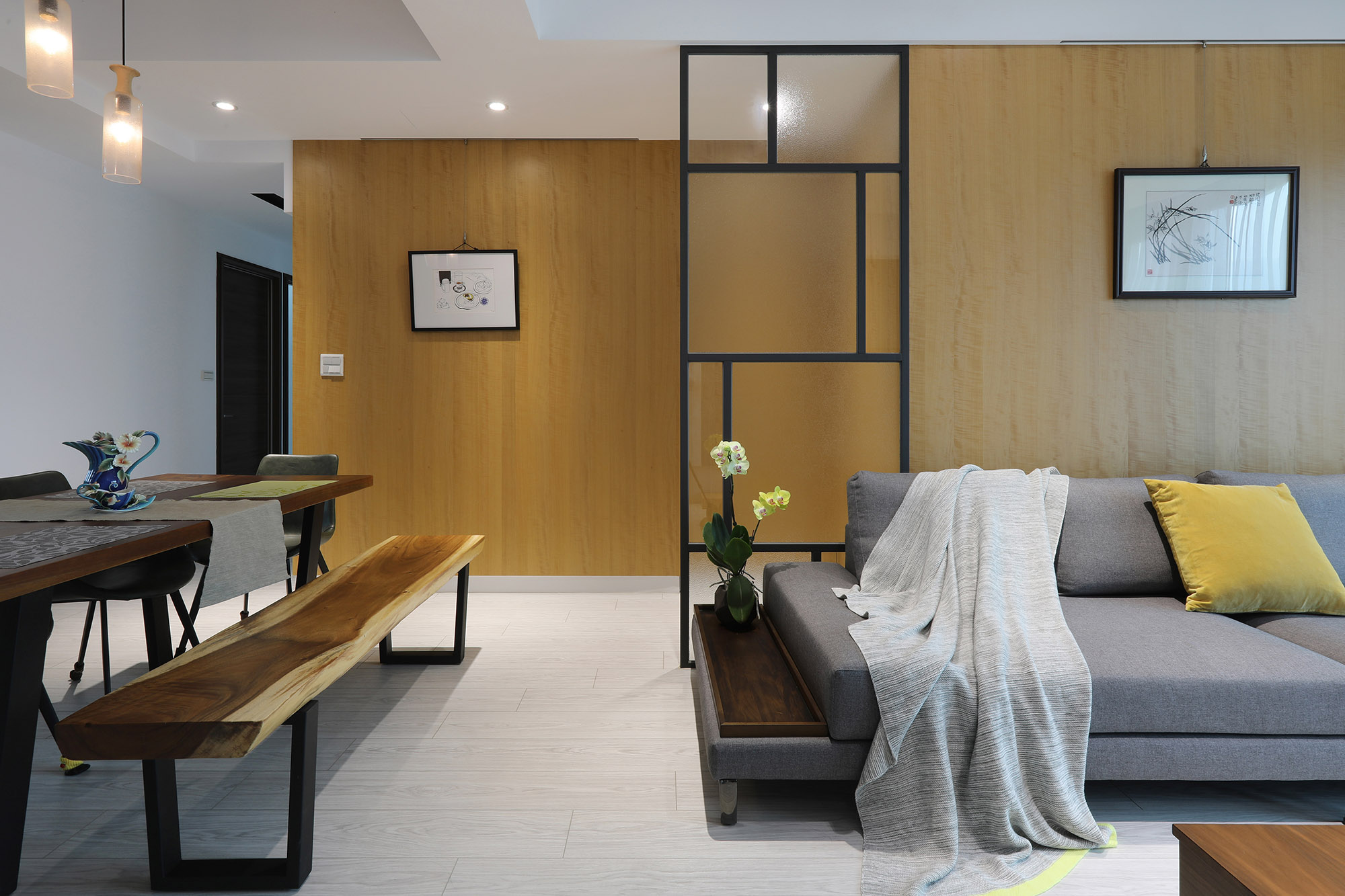 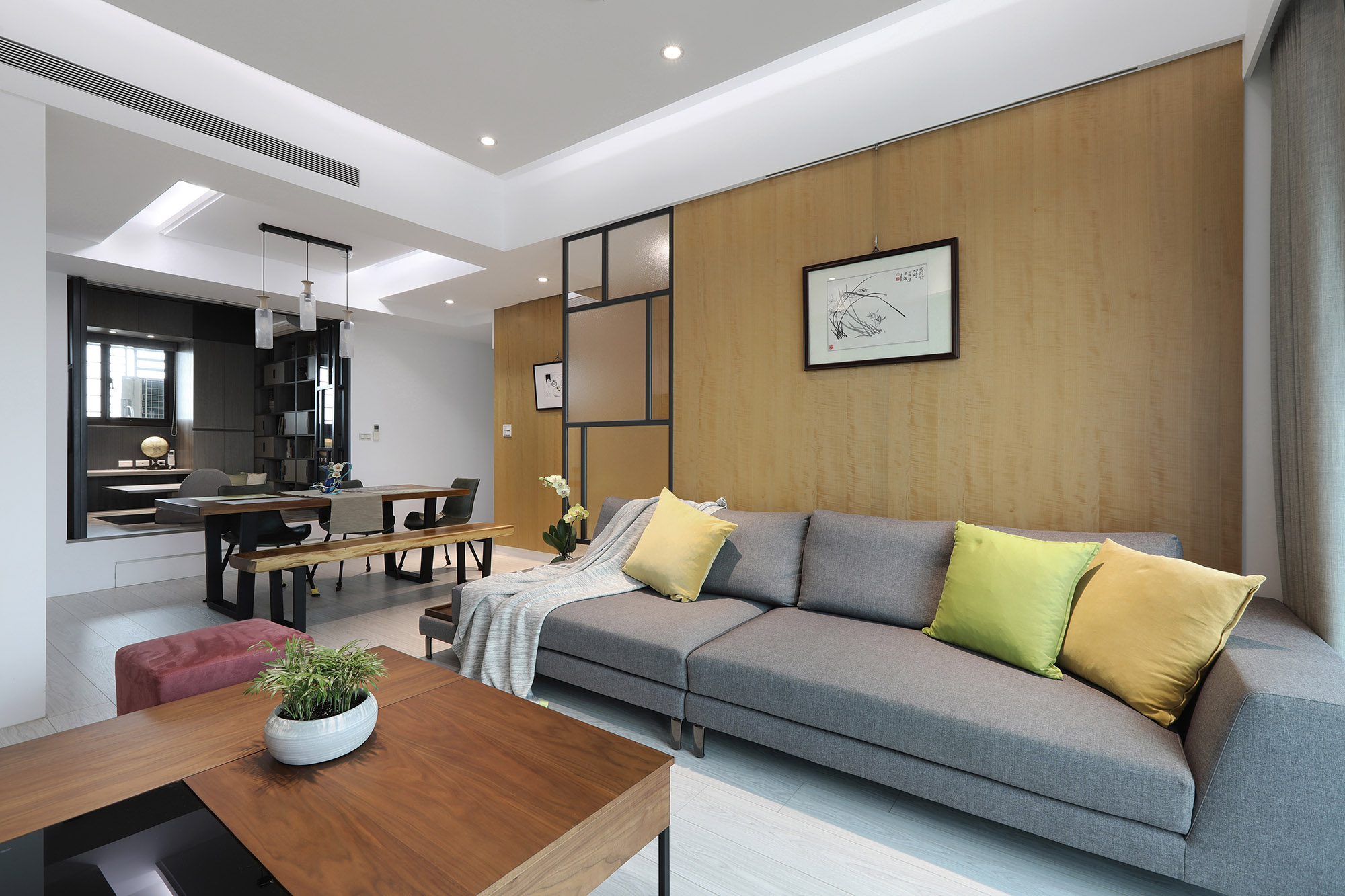 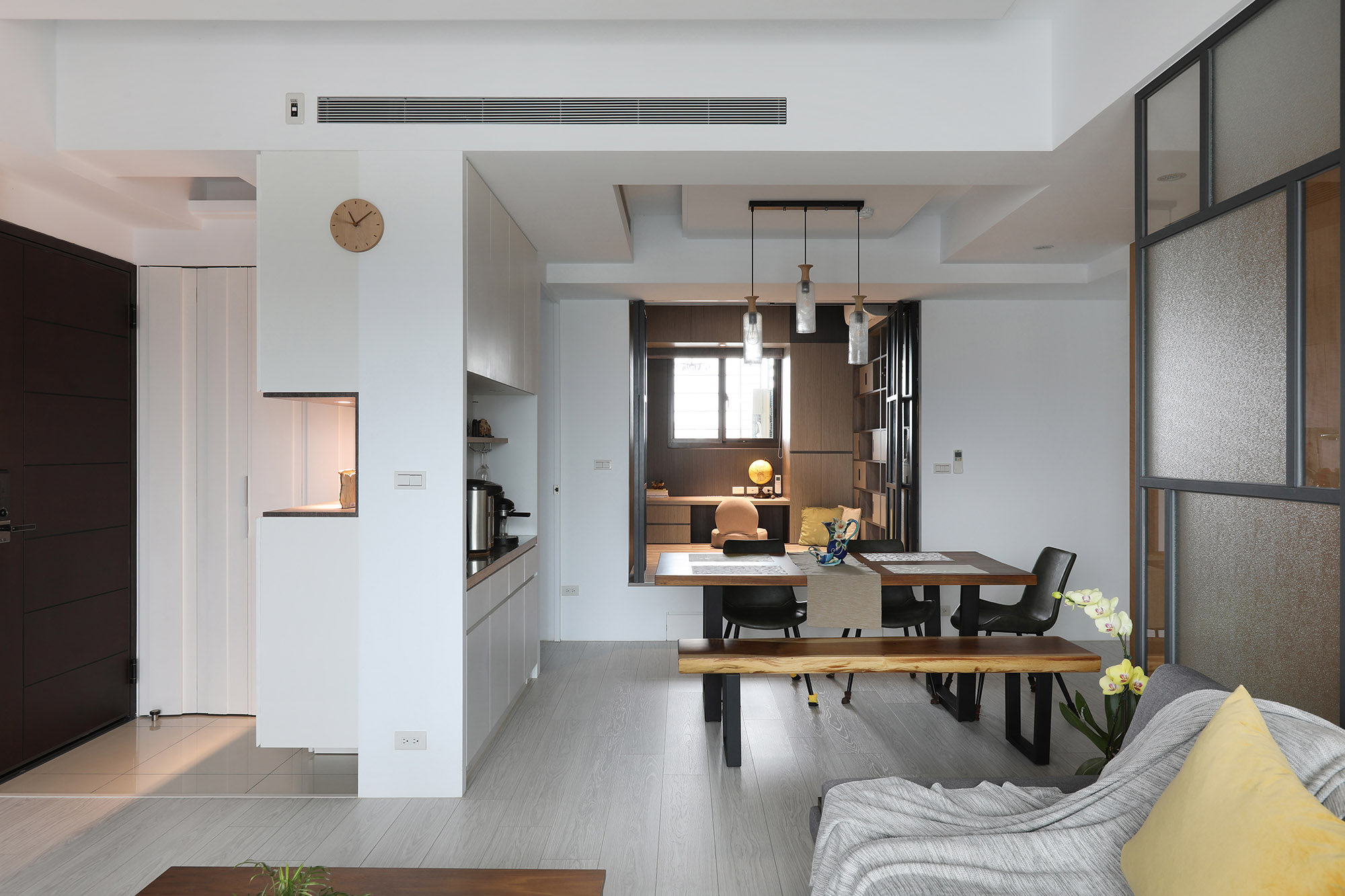 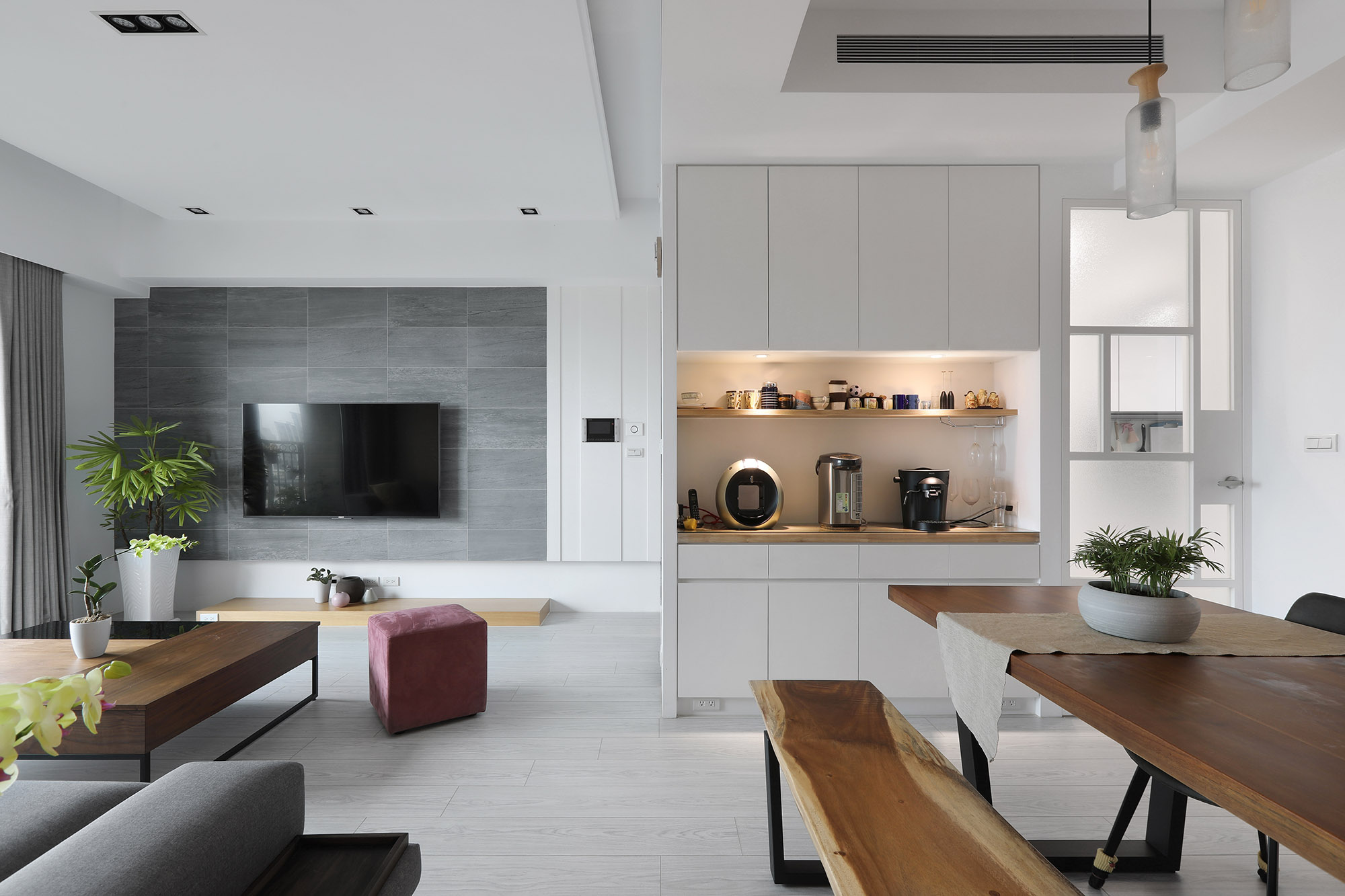 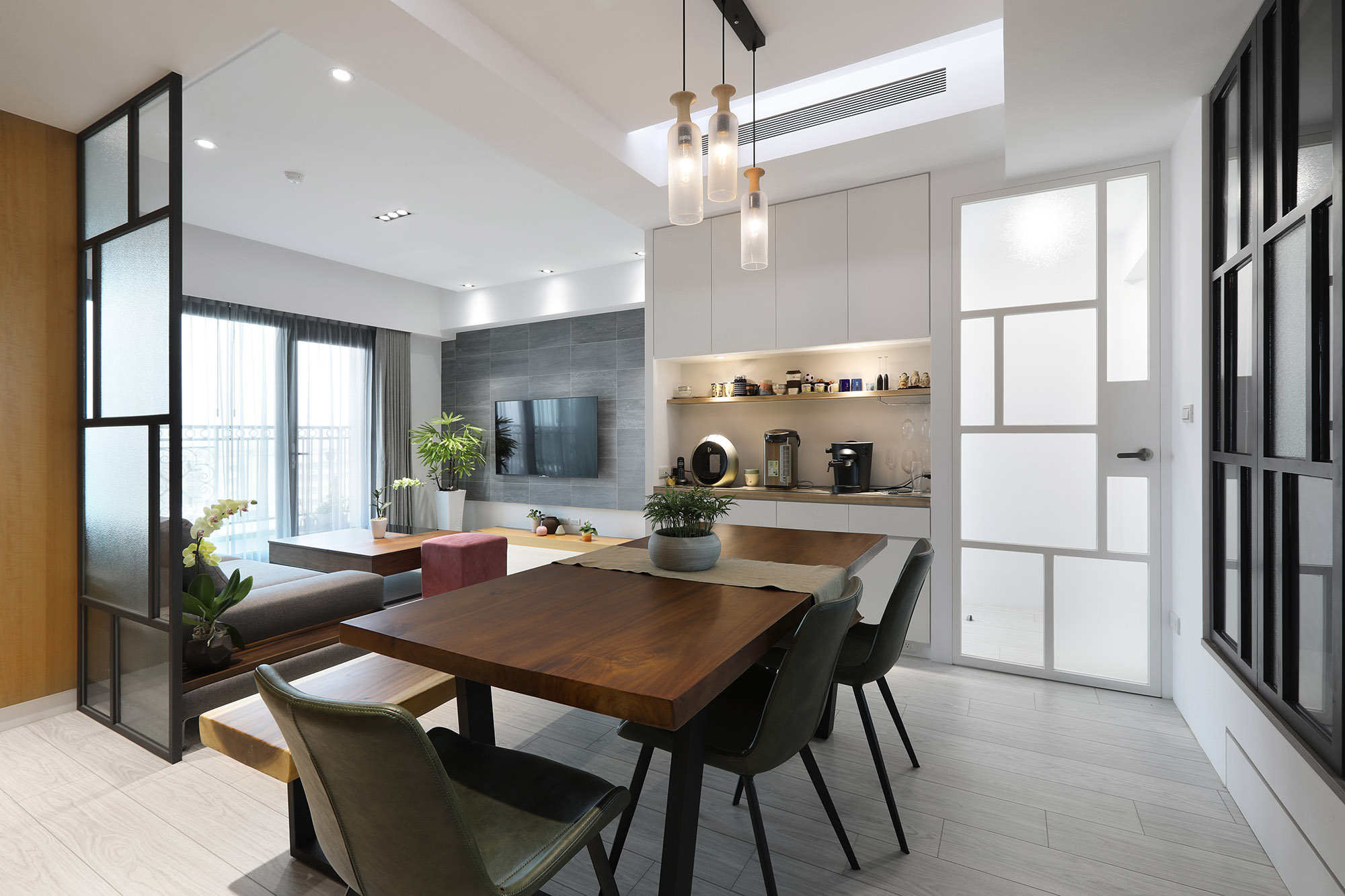 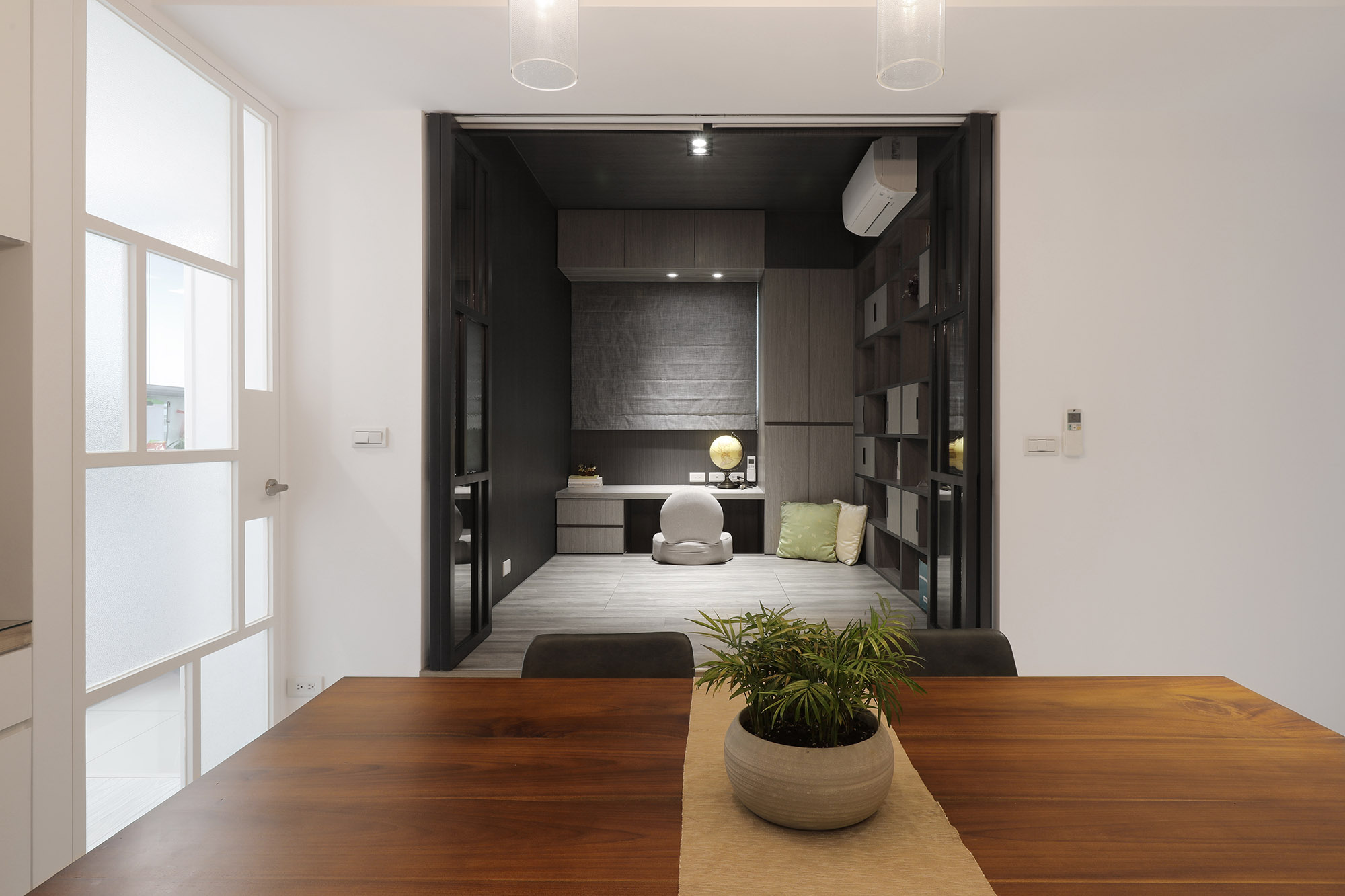 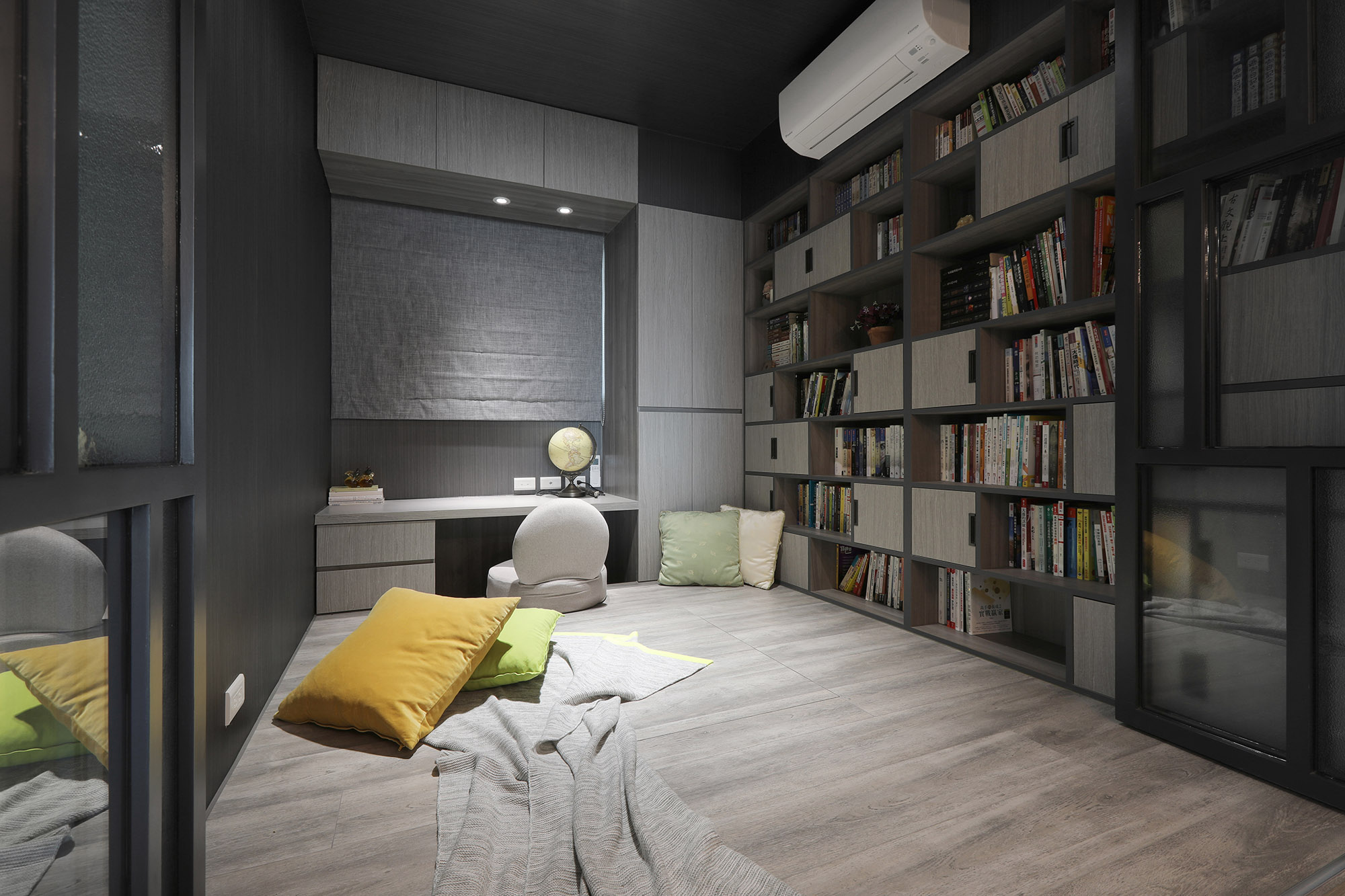 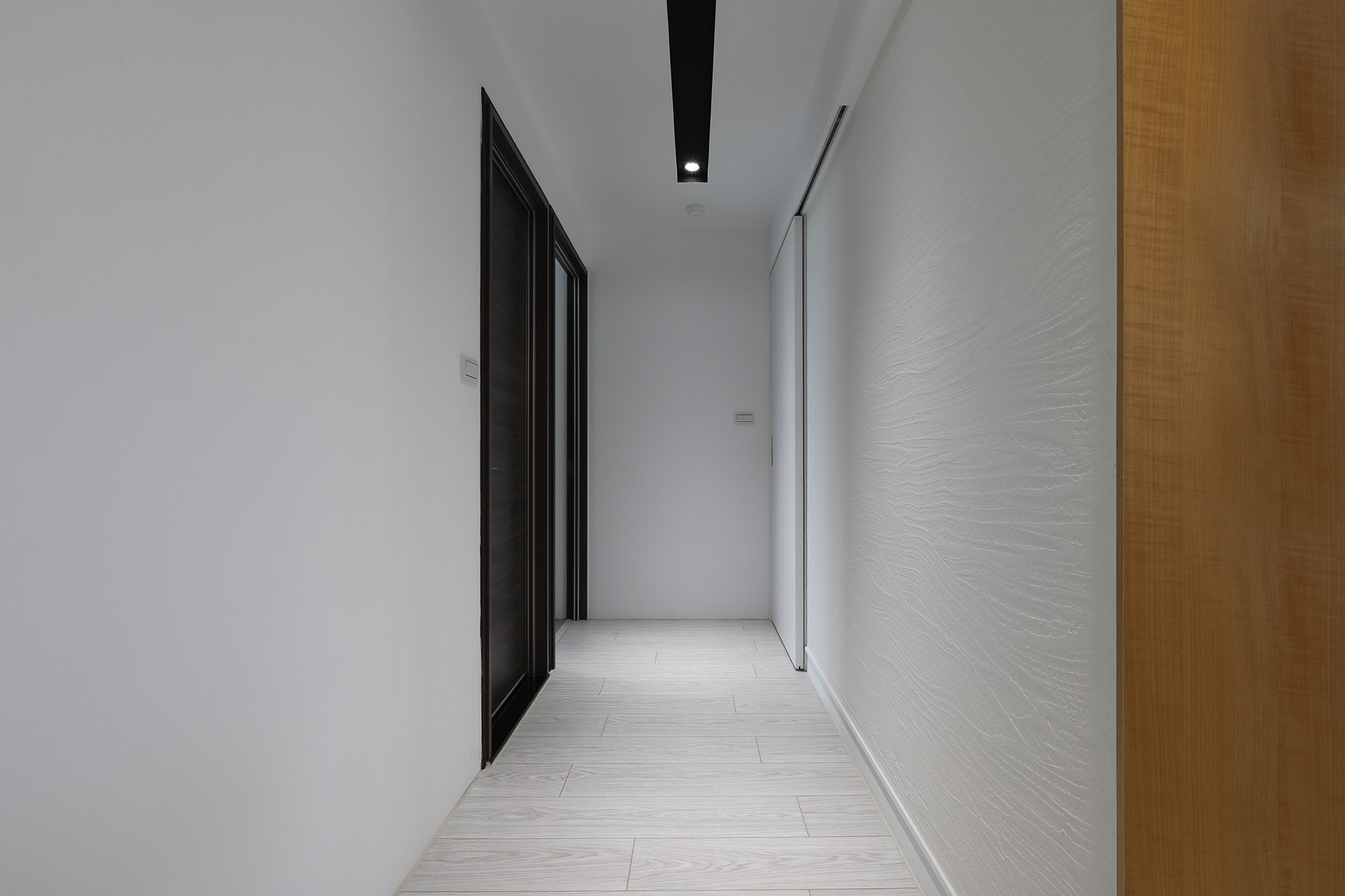 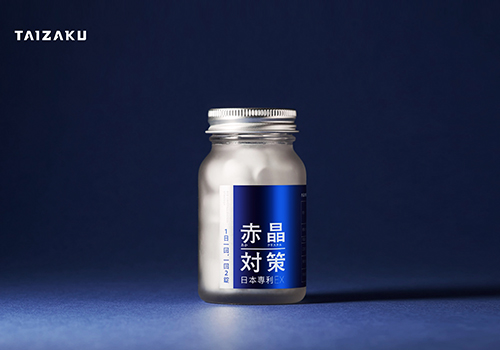 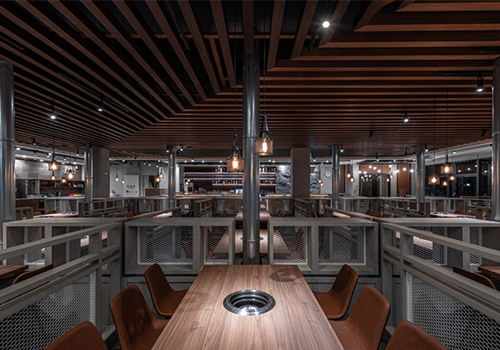 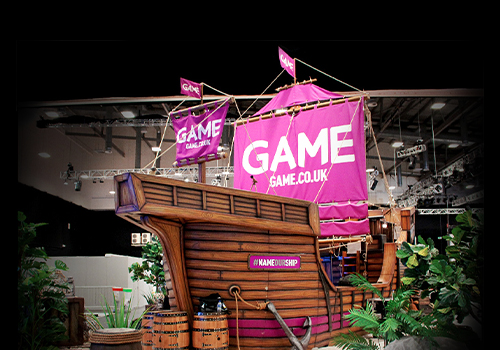 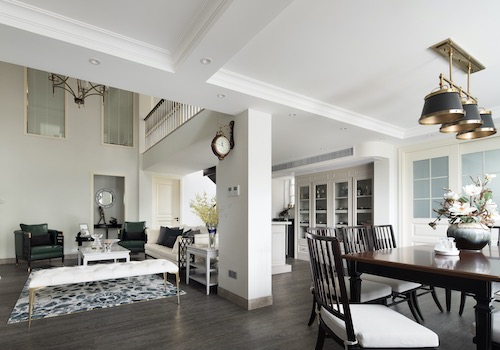