Kempinski Hotel Nanjing is located near to the Ming Dynasty Palace Ruins, which is also known as the biggest palace complex in the Middle Ages with rich traditional cultural heritage. In order to make the fleeting yet glorious Ming Dynasty Palace culture to be memorised as time passes by, and also endow the hotel with a unique cultural memory point and its differentiated competitive advantage, YANG takes Ming Dynasty Palace as inspiration, adopts the approach of story-telling of the magnificent space and retraces the ancient Chinese civilisation of 600 years ago to create a unique Kempinski Hotel in Nanjing. The design is innovative in terms of techniques. The space incorporates the representative cultural themes of Ming Dynasty such as “Ming Dynasty Palace”, Jiangnan Examination Hall”, “Qinhuai Night Scenery” and “Jinling Taverns”. It is not simply copy and represent the history, instead, it adopts modern design techniques to transform the complexity of Royal and Palace culture to simplicity to make the space as an epitome of history and also meets the requirements of modern aesthetics, which perfectly combines the local culture and characteristics of the international hotel brand. In terms of circulation design, considering the nature of the commercial complex and later-phase operation YANG separates the public area and guest room area. The lobby and guest room are on a higher level which takes an exclusive elevator to arrive and also provides a nobler and more private experience for guests. The most difficult part in the design is the lobby. The lobby is oriented from east to west, and the curtain wall is full glass structure, resulting the strong direct sunlight into the indoors. In order to weaken the light perception and brightness, the lobby ceiling applies colourful metals instead of traditional white paint to deepen the tone in the space; the hollow artistic screen in the reception desk is made of double layers of metals, which not only weakens the direct light into the face, but also functions as decoration of the space. 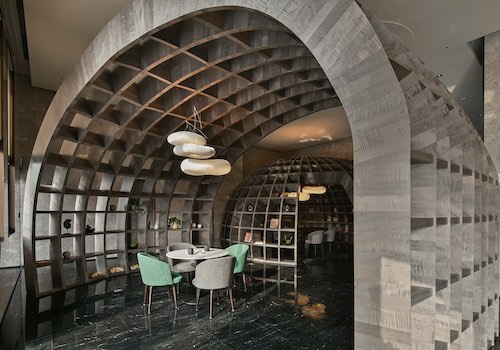 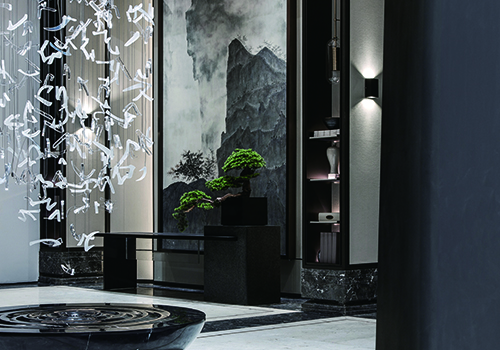 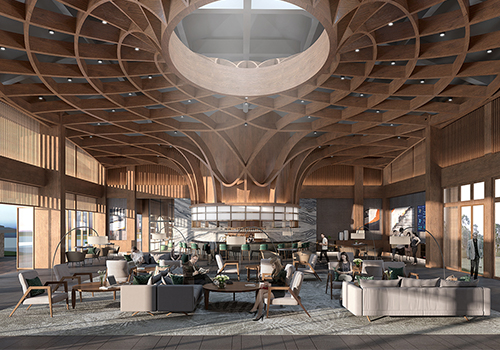 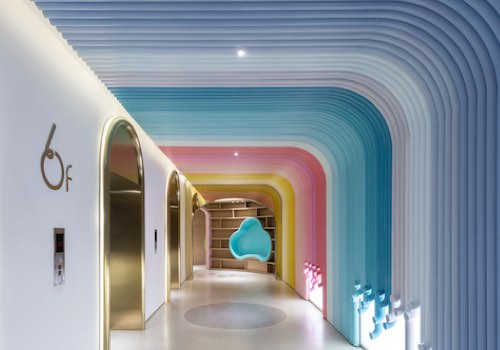